I love kids, I love that they are judgement free and 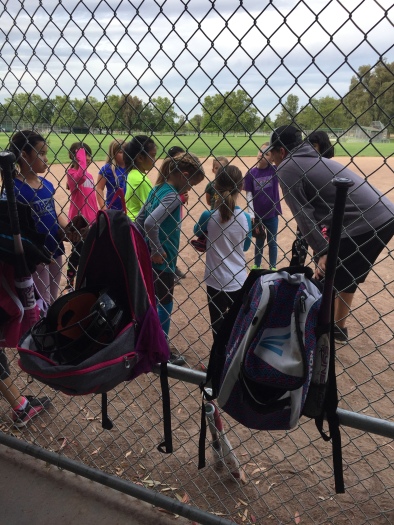 accepting.  That’s Sporty, to the left of the coach in this photo and that’s her new U8 travel team at their first practice.  At a water break, Sporty ran up to me and said a few girls had asked about her AFO and she explained it to them.  I know she hates repeating her spiel over and over so I suggested maybe asking her new coach if she could just tell the whole team at once.  Before I knew it she was marching up to her coach and asking if she could explain her AFO to everyone so she didn’t have to talk about it anymore.

Before I know it, there’s a team meeting and Sporty is talking about her clubfeet, her surgery, and why she’s wearing her AFO (no video because: a) I couldn’t think that fast and b) my phone is on it’s last leg and barely has enough memory for a photo, let alone a video).  The coach asked if anyone had any questions and they kind of all just shrugged and were like “Ok, cool, let’s play ball.”  Then they were all running out to the field to take their positions and take infielding practice.  The coach was floored by her bravery.  And by the way, she tried out in her AFO and obviously it didn’t hinder her tryout.

I love kids because they ask, they don’t stare.  I love that Sporty is confident enough to share and talk about her differences.  Most of all, I love that her teammates (past and present) don’t care, don’t judge, and don’t treat her differently.  All we’ve ever hoped for is that clubfeet doesn’t hinder or hold Sporty back, that she’s judged by her hard work and not her special circumstances.

Oh and she was so excited for practice that she was changed and ready to go 1 1/2 hours early, if only school days were easy like that.  And she killed it at practice, she had solid fielding and throws and bonded with her new teammates.  I’m excited to see her develop and grow this summer!