I had a nice afternoon of walking and riding bikes planned for today but there’s a massive wild fire nearby and we are shelter in place because of the smoke so I guess I’ll blog even though Young Jedi needs something every 30 seconds.

This weekend officially kicked off soccer season for Sporty with her first game on Saturday and a second game on Sunday.  I am now in soccer mom mode, driving around in my CR-V like the little mommy-UBER that I am.  I had flashbacks of softball weekends with the Saturday/Sunday game combo but it wasn’t so bad.  First, Young Jedi wasn’t there one Saturday so I didn’t have to try to entertain him and watch her at the same time.  He went to Marvel Universe Live with the Hubs.  Second, Saturday’s weather was perfect-o!  Breezy, cool, it was glorious.  And last and most importantly, it was 10 minutes down the road!  Fortunately, I still remember our packing routine from softball so I’ve got the wagon, supplies, and trunk arrangement down pat.

Sporty’s team looks GOOOD this season.  This is the third season together for most of them and the second season together for a handful, only because they are 4th graders and had to play up last year while the rest of the group played down.  They are in sync and communicate and they are in it to win!  Unfortunately, they lost the first game 1-2 but it was a tight game and they lost at the end of the second half.  We play them a couple more times this season so I know the girls will be looking for a win.  This team beat us a ton last year and the girls have the fire in their belly to get a win against them.

Sunday, they won 6-1.  Ironically, Sunday’s game was against Sporty’s travel softball coachs’ soccer team and she was extra aggressive going after the ball against her former softball teammates.  She got to the ball first every time, slowly her cheetah speed is returning.  Sporty didn’t have any goals this weekend but she had one assist and best of all, she was the first to high five her teammates who did score.  Let’s hear it for sportsmanship.

Sporty is loving this division in the rec league, they finally keep score and there are refs so she feels big time now!  And she’s super glad we didn’t move to the competitive team.  She’s gotten very close with most of the girls on the team and it’s so fun watching their bonds grow.

More on Young Jedi in a separate post, but I’ve seen some improvements in him the past couple of days.  He actually sat next to me on the picnic blanket and watched and cheered for Sporty’s team during a good portion of the game Sunday.  This is a huge improvement from the summer when he complained incessantly about sitting and watching Sporty play.  We are just about 3 weeks into fish oil supplements and 3 weeks without any food dyes in his diet so hoping we continue to see progress with him.  I’ll take small victories where I can get them. 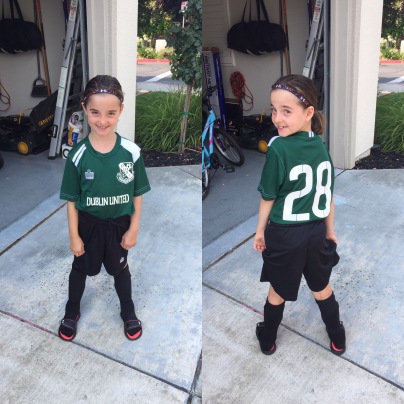 She was excited she got assigned Buster Posey’s number, even though I reminded her it was the wrong sport. 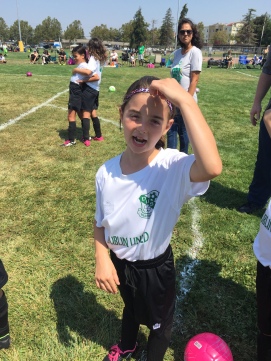 This entry was posted in Uncategorized and tagged cheetah speed, clubfoot athlete, soccer. Bookmark the permalink.