My friend, Soul Sister, posted this question on her Facebook page to see what her friends’ perceptions of ADHD were.  Remember, Soul Sister is my friend who got us in with Dr Fix-It.  Her little guy is Young Jedi’s birthday twin and has ADHD and clubfoot so we met via clubfoot and later figured out our boys were Birthday Twins.  As Sporty says, “It’s fair because me and Birthday Twin have clubfeet and you (Young Jedi) and Birthday Twin have ADHD.”  I laughed and said “Well it’s not very fair to Soul Sister who has a double whammy of both diagnoses rolled into one kid.”  That was our funny conversation for the day a couple of days ago.

But I digress…I must say, having Soul Sister go through both journeys with me has been a God Send.  I don’t know what I would do without her.

Here are some of the comments (just a handful because she got a lot great responses) that she got from her experiment:

“I have suffered my whole life with this. ADHD is hearing the whole room instead of one voice, unable to complete a task, forgetting why you went into a room, interrupting others because you will forget what you have to say, and so on”

“Inability to focus and complete a single task due to the overstimulation of environmental, emotional, physical, social factors surrounding a person.”

“And often misplaced judgment when sharing your struggle.”

“Misunderstood. You can literally watch the kids fighting to control their body and being unable to stop the impulses. Then hear parents call the kid a bad influence”

For our family ADHD is a lot of things.  It’s not understanding the way Young Jedi’s beautiful mind works.  It’s constant chaos, it’s walking on egg shells waiting for the bottom to fall out even on a good day.  It’s judgement, “oh he’s young and a boy, it’s not really ADHD.  He’ll grow out of it.”  “You’re not medicating, are YOU!?!”  It’s knowing your child stands out in the crowd.  It’s losing friends, for you AND your child.  It’s the assumption that your don’t discipline.  It’s the sinking feeling when you can tell the girl in front of your child is crying because she doesn’t want to stand in line next to him.  It’s wanting to fix your child and making their world bright and happy again but not knowing how because they have to be parented completely differently than your other child.  It’s your child apologizing for getting their name on the board at school but recognizing he has no control over his body.  It’s sadness knowing your child is trying so hard but just can’t be successful.  It’s your child being behind academically, like really behind and wanting to help them but them literally not having the capacity to sit still and do more academics after 4 hours at school.  It’s your other child enduring hits and punches and kicks for no reason.  It’s your child telling you they don’t want to be a part of your family because no one loves them.  It’s a lack of resources.  It’s always being “on” and ready for the next meltdown and never really being able to relax and decompress.  It’s going to the closet and crying over the struggle your child will have in life and hoping for the strength to help them fight those battles.  It’s lonely.  It’s isolating.  It’s all of these and so much more.

But at the end of the day, these are the faces of ADHD for Soul Sister and I, two sweet boys that deserve a chance at success and happiness.  The reason to keep fighting. 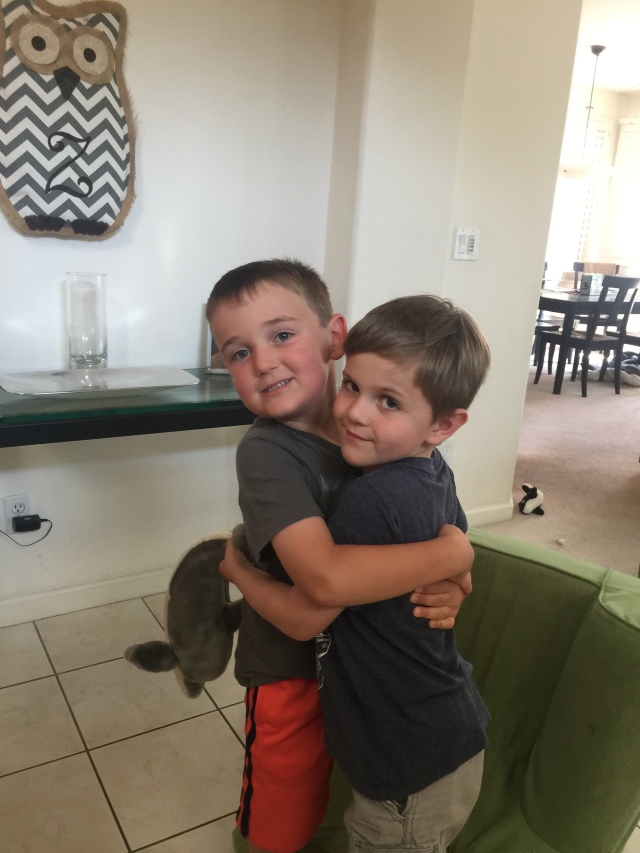 This entry was posted in Uncategorized and tagged ADHD, family, young jedi. Bookmark the permalink.