Imperfections are the New Perfections

We haven’t been to Dr Fluffy Unicorn since August. This is the longest we’ve ever gone between appointments, we don’t go until June. In fact, I don’t think he knows we’re moving a few weeks after we see him, that’s how long it’s been since we’ve seen him. I must say I’m starting to get ants in my pants to have her feet checked. I haven’t been entirely happy with how they look but she’s rocking softball season (she ran from second to home plate the fastest I’ve ever seen her run last week) and she has no pain, so am I looking for trouble where there isn’t any? Do I need to learn that her feet are never going to look perfect or normal? That maybe, where she’s at right now, that’s her perfect? I was on one of my Facebook Clubfoot groups earlier in the weekend and someone asked for pictures of kids’ corrected feet. Sporty happened to be awake and not running around at the time so I snapped these photos of her feet. I got a couple of comments about how perfect her feet looked and it got me thinking about how maybe I just need to lower my standards and realize that if she’s living the life she loves (ie running around like a crazy person) and she’s pain free, doesn’t that count as perfect? Maybe our perfect is a pain free, active life. I just worry cosmetically as she gets older that people will notice her feet look different. Especially as she starts a new school this year, in a new town, with people who don’t know her fight story. 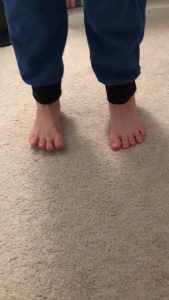 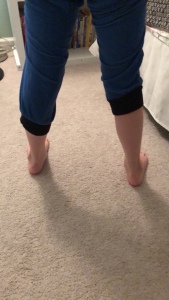 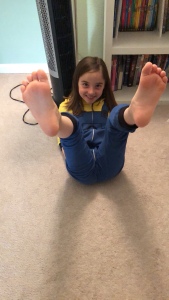 Sporty is starting to embrace her Clubfoot. She’s starting to realize the distance she’s come. Last year I made a video for her that she loves for world Clubfoot day. Today she asked if she could help pick out the pictures and help me make a video again of her for World Clubfoot Day. She showed last year’s video to her friend on the way to a softball game, telling her that the Drs told us she’d never run or be able to compete with her peers. Earlier that day Sporty and her friend found out that they made the summer travel softball team that they both tried out for. Her friend turned to me and was like “Wait, she wasn’t supposed to be able to run? She’s like the best girl athlete!?!” I’m proud of Sporty for sharing her story voluntarily with her friend. In past years, I’ve had to force it out of her. She wears her scars with pride these days and she’s not ashamed of her feet, despite some bullying over it earlier this year. In fact, I think the bullying made her more proud of her feet and he scars, cause that’s just how Sporty is. She has taken to saying that “clubfeet can’t hold her down.” I think the more she talks about her feet, the more hope she gives to others about their future with clubfeet. After snapping the pictures above, she got to her game and got this hit! It’s by far her best hit ever!