We had quite the busy week last week.  It started with Young Jedi having tee ball practice on Monday, followed by Sporty’s soccer clinic on Tuesday, Sporty’s first softball game on Wednesday 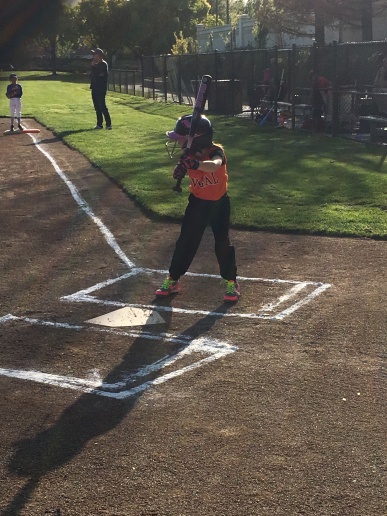 and then softball practice for Sporty on Thursday.  (Notice 3 of those 4 sports days were for Sporty!?!  Poor Young Jedi.)

Sporty was incredibly excited for her first game, and after the crazy wet winter than we’ve had, it was a beautiful day for her first game.  I think part of her excitement stems from the fact that her team is orange and black this year, which of course are Giants’ colors, her favorite team in the entire world but she also thoroughly loves softball.  She becomes a different kid out there, she’s focused, confident, and mature beyond her years.  She told everyone about her game at school and even invited our neighbors to her first game and they were so amazing to show up, even with a Slurpee in hand with Young Jedi whom definitely deserved it with all of the hanging out he does for Sporty’s many activities.

The whole team played great but the game could not have gone better for Sporty, she was lead off batter and hit 3 for 3 (she scored 2 times even though we don’t keep score).  She had some good fielding as well and her cheetah speed is beginning to return.  And husband, who had previously explained to Sporty that he wouldn’t be able to make her game because of work, surprised her and was there before her first at bat (which was her best hit of the game!).  She was elated leaving the game.

The most amazing part of the game, she left the game PAIN FREE!  This is the first time since December 1 when she had her tendon transfer that she has been pain free.  Just shy of 4 months for her to get there.  She had to sacrifice running club the last two weeks and has taken it as easy as Sporty is capable of taking it easy but she’s there.  She is pain free and loving it.  And I am loving that even more than her successes on the field because deep down, with all of the struggles we have had this go-round with the surgery, with all of the pain she’s had physically and emotionally, I’ve wondered whether or not I made the right decision for her.  I worry daily that I put her in a position of pain when she was functioning just fine and competing.  What if this surgery was for nothing?  But she turned the corner, she’s pain free.  She walked off of the softball field, elated, loving the game, and not dying to get off of her feet for a rest!  My girl who keeps fighting no matter how hard clubfoot tries to knock her down.

This entry was posted in Uncategorized and tagged cheetah speed, clubfeet, softball, surgery. Bookmark the permalink.